by Ali Abdirahman
in English News
0

The UN University for peace marked another historical achievement following the signing of the instrument of accession by Somali President Dr Hassan Sheikh Mohamud. The move means that the Somali Government has officially endorsed the UPEACE Charter and is expected to implement it.

Reacting to the news, the University’s country representative Dr Mohamed Osman said the decision by the president is a welcome news. “This is highly welcome news, and it puts the university’s Somalia branch at the same level with the rest of the countries that have signed the charter,” said Dr Mohamed.

“The students will also benefit from various scholarships offered by the institution”, added Dr Mohamed.

Somalia’s President Dr Hassan Sheikh Mohamed signed the instrument of accession while attending the 77th UN General Assembly, making Somalia the 42nd country to sign the charter, which was born out of UN General Assembly Resolution 35/55 of 5th December 1980 which established the University for Peace with Headquarters in Costa Rica and Regional Programmes in Africa (Ethiopia), Europe (Netherlands) Asia (China), South East Asia (Philippines), and in South America (Honduras).

A few years ago, the University was welcomed in Somalia after it started offering its courses. Before that, Somali students used to travel to Costa Rica and to the neighbouring country, Ethiopia, where the University has its Africa Regional campus for the continent.

“The signing of the UPEACE Charter by the president is yet another huge step for the university and we hope it opens doors for expansion in Somalia and for many students to enroll into the courses offered by the university” said Dr. Mohamed Yusuf, UPEACE Somalia Country Director.

The establishment of the university in Costa Rica, a country in Central America, played a pivotal role in establishing the first base for the University. In Africa, the University established its Africa Regional Programme in  2002 in Addis Ababa, Ethiopia, which opened doors to thousands of African students keen on pursuing courses related to peace, security and development.

Many of the graduates are now using the knowledge gained to build peace and help support their communities. In August 2018, Upeace established its first campus in Mogadishu, Somalia University’s first batch of students for Master’s and PhD Programs.

UPEACE will be organizing its next graduation ceremony in Somalia at the end of October 2022 with more than a hundred Masters and at least 10 doctoral students expected to receive their Degrees. 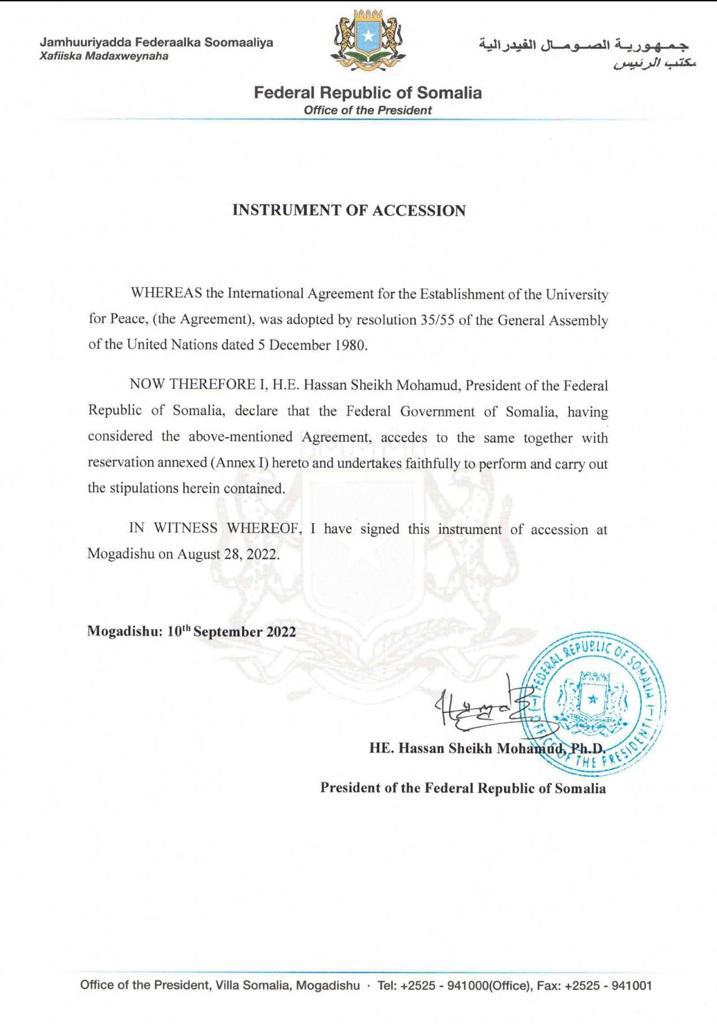